Ed Garrison is the Patriarch of the Garrison Family.

The first to attend college in his family he had a long and successful career with Thiokol Chemical Corporation culminating in the positions of CEO, President and Chairman. During his distinguished career he managed the Minuteman Program, was instrumental in the development of air bag technology and oversaw the Space Shuttle Program.

He has served on several Boards and has been involved in philanthropic pursuits. His keen sense of business and his people savvy has served him well.

Retiring in 1993 he has since been involved in Garrison Capital as its CEO and lead strategist.  Ed enjoys golf and intellectual pursuits mostly related to technology (Apple products).

Dr. Thomas Garrison graduated from the Uniformed Services University of the Health Sciences with his MD degree in 1982 after which he completed a residency in Emergency Medicine.  As a flight surgeon in the USAF he participated in the F-16 medical operations and served as consultant to the USAF Command Surgeon General.

He received residency training in Emergency Medicine and served in this capacity to complete his military service.  Dr. Garrison then practiced Emergency Medicine for another 20 years mostly in Ogden, UT within the Intermountain Health Care (IHC) system.  He served as department chair for 5 years, served on the Executive Committee and was the founding director of the IHC Emergency Medicine Clinical Programs. 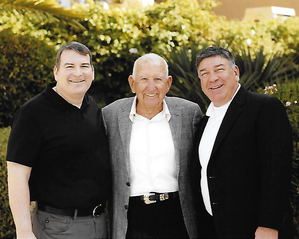 As an entrepreneur Dr. Garrison was a founder of Bio-Path Holding, Inc., a biotech company affiliated with the MD Anderson Cancer Center in Houston, TX.  Bio-Path is in the midst of clinical research on several cancer chemotherapeutic drugs and has a patented novel delivery system.  Dr. Garrison was a founding Board member and remains as a large shareholder.

Dr. Garrison is a principal owner of MyDietitian, LLC which provides dietitian services via a mobile app for health and wellness.  Recently endorsed by the CDC as a virtual offering for the Diabetic Disease Prevention Program this platform is rapidly being adopted by insurance programs nationwide.